‘If you do what you want, when you want’ kick starts Nike’s new woman’s campaign.

An animated manifesto was created to inspire women to seize the day, to be determined and strong and join like minded others at Nike.com.

Intro were tasked to bring the manifesto to life in various formats ranging from in-store LED screens to online web executions.

With a tight deadline Intro managed to also turn the film around with x5 language variations to be played out across Europe. 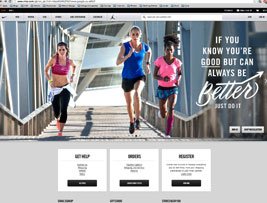